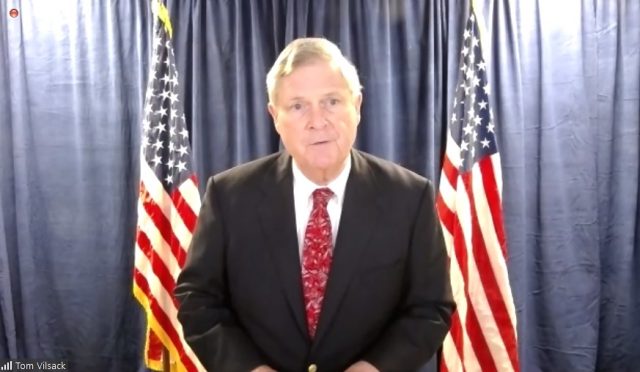 IARN — The stepped-up basis tax break is still in the Biden Administration’s crosshairs, based on recent Congressional testimony.

As Congress enters two critical weeks to decide the fate of the controversial Biden “Build Back Better” budget and how to pay for it, administration officials are keeping alive a proposed elimination of the stepped-up basis—key for offsetting farm transfer taxes at death.

USDA Secretary Tom Vilsack at a recent House Ag hearing: “If the farm continues to be owned and operated by the family, there is no impact, there is no tax due, there are no capital gains that are due then. Secondly, if, in fact, at some point in time in the future, the family decides to sell the farm and get out of the farming business, there are exemptions—a million dollars a person.”

Vilsack answered the question this way: “Our ERS has taken a look at this, and they have concluded, not once, but twice, that roughly 98 percent of family farms in this country are not going to be impacted and affected by this.”

During this past summer’s Iowa State Fair, House Ag Committee Ranking Member GT Thompson of Pennsylvania said a recent study from Texas A&M’s Agriculture and Food Policy Center found that stepped-up basis changes would impact 98% of family farms and impose an additional tax liability of over one million dollars on farms in the Midwest.

“We’ve thrown some grit and sand in the gears of the Biden Administration on this proposal,” said Thompson. “We reached across the Capitol to Senator John Boozman who is the Ranking Member on the Senate Agriculture Committee. Together, we sent this request to Texas A&M’s Agriculture and Food Policy Center. They are a great group and are known to do great analysis on agriculture and rural America.”

“The question is, how much of a farm operation do you have to sell off to get $1.4 million to buy your family farm back from the government and still have a farm at the end of the day?”

American Farm Bureau President Zippy Duvall argued last month that a tax “carve-out” for farms is dangerous since it creates a lingering tax liability that could discourage farm lending and impacts ag input suppliers who will pass along costs to producers.