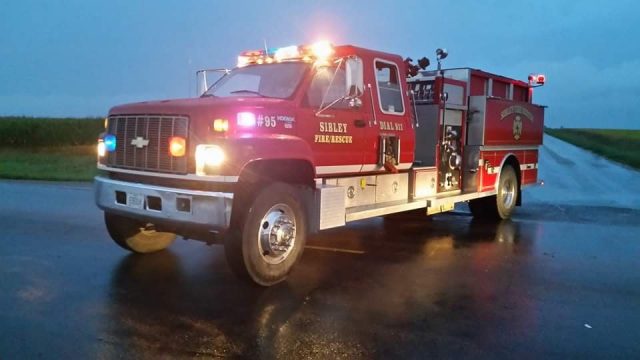 Sibley, Iowa– A large self-propelled field sprayer was destroyed in a fire on Thursday, August 4, 2022, near Sibley.

According to Sibley Fire Chief Ken Huls, at about 6:30 p.m., the Sibley Fire Department was called to the report of a sprayer fire on Highway 60 near 200th Street, about three-quarters of a mile southwest of the Sibley Airport.

The chief says the fire department saw the engine compartment on fire as they approached the scene. He says they used water and foam to fight the fire on the 2013 Hagie high-clearance sprayer.

Huls says no injuries were reported.

He tells us that while en route, they called for the Ashton firefighters to be paged as well, due to low manpower numbers from the Sibley department.

He says the cause of the fire appeared to be old corn leaves that were laying on the exhaust pipe.

Chief Huls reports that the unit was totaled in the blaze. He says he was told a new one costs in the neighborhood of $300,000.

He says the firefighters who responded were on the scene for about 25 minutes.