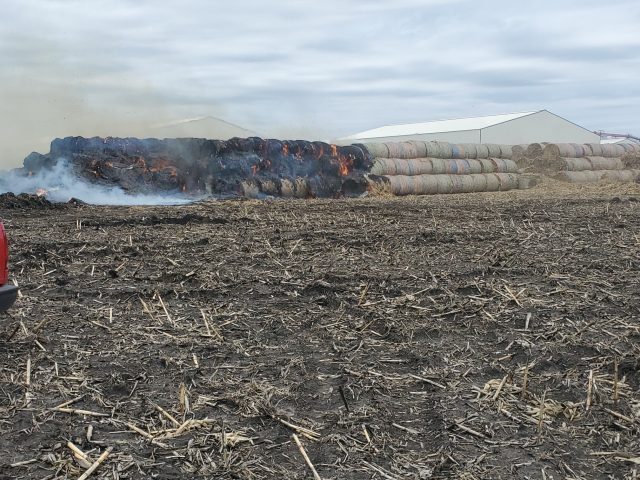 May City, Iowa — Forty-four hours after the original page went out, a fire was extinguished for good on Wednesday, May 11, near May City.

According to May City Fire Chief Nick Shaffer, about 11:00 p.m. on Monday, May 9th, the was called to the report of a cornstalk fire at Sunrise Farms at 2060 White Avenue, two miles north and a mile and a half east of May City.

Shaffer says the bird flu had hit that facility, and they were grinding cornstalk bales to compost the destroyed birds. He says there were probably 3000 round and large square cornstalk bales and a large pile of ground up cornstalks. He says he is under the impression that the fire started when the ground bale pile self-ignited due to spontaneous combustion.

He says the fire jumped quite a few times and got into the bales standing by. He says they tried for quite a while to put the fire out with limited personnel, and the strong wind was also a factor. On Wednesday morning the forecast suggested that putting the fire out with “all hands on deck” would be the right course of action because the fire was now threatening buildings as well.

At one time or another the May City Fire Department was assisted by the Harris, Melvin, Ocheyedan, Lake Park, Hartley, Milford, and Sibley fire departments.

Shaffer says no injuries were reported.

Chief Shaffer reports that the only things lost in the fire were the roughly 3000 cornstalk bales and one fire hose which sprung a leak.

Shaffer also says rural fire departments like his are in need of more help. So if it’s ever crossed your mind to be a volunteer firefighter and help your community by putting out fires, you would be welcomed with open arms. He says he also wants to send a “shout out,” or a “thank you” to the Osceola Rural Water folks for assisting them with all the water they used.

Hartley Fire Chief Brad Meendering says some of their firefighters left the May City fire to respond to the report of a hog barn on fire at 380th Street and Warbler Avenue, about five miles south of Hartley.