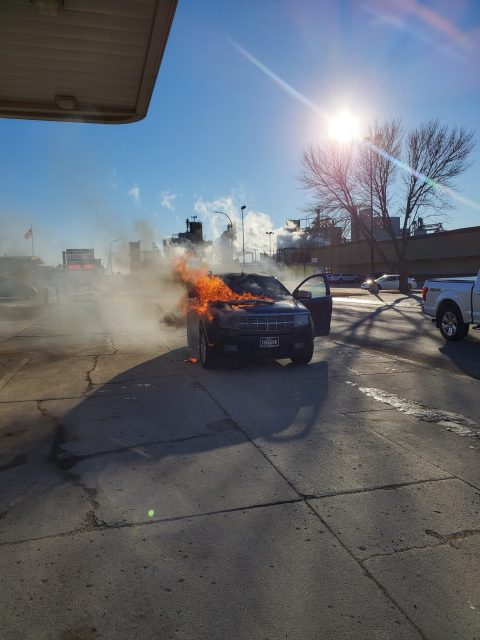 Sheldon, Iowa — A car was destroyed in flames on Tuesday, January 25th in Sheldon.

According to Sheldon Fire Assistant Chief Brad Hindt, firefighters were paged about 3:35 p.m. for a vehicle fire at 603 Second Avenue. That’s the old Cenex Coop Oil gas station on old Highway 60. He says when they got there, the firefighters found a 2007 Lincoln MKX with flames coming out of the hood.

According to Assistant Chief Hindt, the Lincoln MKX was a total loss. He says they fought the fire with foam in addition to water.

Fortunately, Hindt says no damage could be seen on the fuel pumps or canopy.

Sheldon Fire Company was assisted on scene by the Sheldon Police Department and City of Sheldon Street Department with a sand truck.

They got done with that call about 4:45, which was just in time to handle another call, which came in about four minutes later.

The second call was for a fire alarm at Building D at Northwest Iowa Community College. He says when they got there, firefighters found that a contractor was cutting a hole in the block wall and the dust had set the smoke alarm off. There had been no fire.