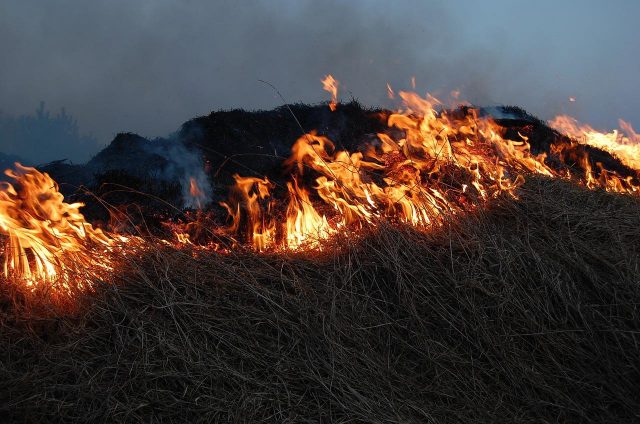 The Sioux Center Fire Department was called to a field fire on 390th Street between Indian and Ironwood Avenues this Thursday morning a few minutes before 10:00 a.m. That’s three to four miles east of Sioux Center’s north side.

He says they think the fire was caused by a hot bearing on a combine that had just gone through, but the combine was not damaged.

Firefighters from Orange City and Hull also helped put out the fire, along with seven to eight farmers with disks.

Van Holland tells us firefighters were there for about an hour.

The day before, the Inwood fire department had a similar call, but theirs started with a baler. Inwood Fire Chief Troy Van Beek tells us the call was to 260th Street and Dipper Avenue, which is about three miles east and two south of Inwood. The page went out just before 1:30 p.m. on Wednesday.

He says it started as a baler and bale on fire out in a field, and then the surrounding cornstalks caught on fire. Van Beek tells us the landowner was able to put out the stalks with a fire extingusher and the fire department put out the baler. The actual cause inside the baler is undetermined, says Van Beek.

He tells us the baler is totaled but less than an acre of corn stalks and stubble burned. He says they were out there for about an hour.

No injuries were reported in either fire.