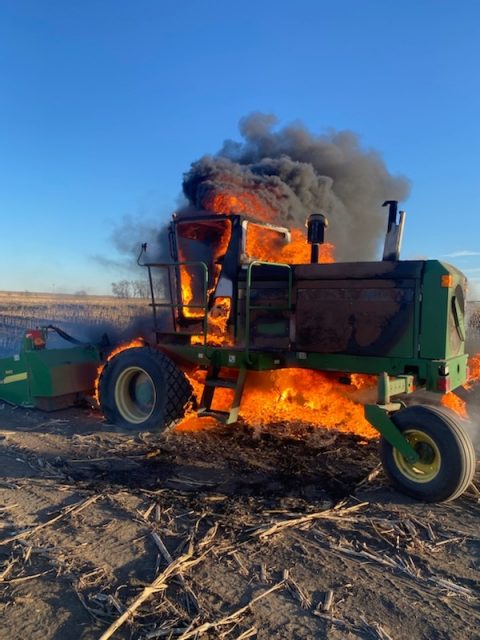 The first one was a farm equipment fire in which a farm windrower caught fire and was destroyed. Fire Chief Mark Shriver says coincidentally it was his own windrower that caught fire. He says he was five miles north and a mile east of Sutherland near M12 and 410th Street when he noticed a fire in the engine compartment of the unit. He says by the time he got his stuff together and escaped the burning unit, it was engulfed in flames.

Luckily, says Shriver the ground he was on had been picked for silage, leaving only very short stubble and not much to catch fire. Also, he says it was only about 30 yards from some CRP grassland, so it could have been worse. He says firefighters were there for about an hour, tops.

The other fire call was to a basement on fire north of Hull. Hull Fire Chief Ron Hoksbergen says when they arrived, firefighters found flames coming from the basement and a house full of smoke. He says firefighters donned air packs and made quick work of extinguishing the fire. He tells us that there was some light damage to clothes and paperwork and they had to knock out some windows for ventilation, but besides that, the damage was minimal.

Rock Valley and Doon firefighters also responded. Hoksbergen says the cause of the fire is undetermined. He says they were on-scene for about an hour.