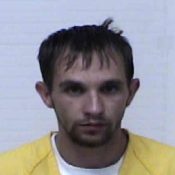 According to authorities, about 8:40 Wednesday evening, a Lyon County Deputy attempted to conduct a traffic stop near the intersection of Highway 9 and Lily Avenue, southwest of Little Rock, for a registration and equipment violation. Deputies say the vehicle failed to stop and a pursuit continued westbound on Highway 9.

Another Lyon County Deputy was able to successfully deploy stop sticks near the intersection of Highway 9 and Indian Avenue. Deputies say the suspect vehicle then went off road and became stuck in a field/ditch and the suspect took off on foot. The suspect was apprehended a short time later and was identified by authorities as 24-year-old Daniel Lingar, of Sioux Falls.

According to authorities, Lingar was charged with Eluding and Fugitive from Justice, both of which are Class D Felonies. In addition, he was charged with these Misdemeanor crimes: 4th Degree Criminal Mischief, 1st Offense OWI (drugged), Possession of Methamphetamine, Interference With Official Acts, Possession of Drug Paraphernalia, Reckless Driving, 2 counts of Driving on Wrong Side of Roadway, Defective Tires, Window or Windshield Requirements, Speeding (100 in a 55 mph zone), No Valid Driver’s License, Failure to Maintain Control and Failure to Display Registration.

According to authorities, Lingar was lodged in the Lyon County Jail where he was additionally served with 2 outstanding warrants from Minnehaha County, South Dakota.

The Lyon County Sheriff’s Office was assisted at the scene by Trackside Towing.