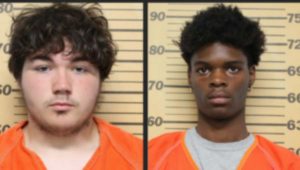 Estherville, Iowa — New information has been released surrounding the events that led to the murder of an Estherville man before his body was found along an Emmet County road on Saturday morning.

A criminal complaint says 20-year-old David McDowell was reportedly lured to an apartment last Friday by 19-year-old Connor Uhde and 18-year-old CeJay Van Der Wilt before he was shot to death early the next morning along a roadway about five miles outside of Estherville. His body was discovered several hours later by a passing motorist.

Uhde and Van Der Wilt were both arrested and charged with first-degree murder on Wednesday after simultaneous search warrants were executed at their homes in Estherville and Rockwell City. No motive behind the killing has been released. Both suspects remain in custody without bond and are due back in court late next week.

Estherville, Iowa — The Emmet County Sheriff’s Office is releasing additional details in regard to the discovery of a body found on a rural Emmet County roadway last Saturday that was identified as that of 20-year-old David McDowell of Estherville.

According to authorities, an exhaustive investigation by the Emmet County Sheriff’s Office, Iowa Division of Criminal Investigation and Estherville Police Department, two search warrants were simultaneously executed in Estherville and Rockwell City, Iowa at approximately 05:45 am Wednesday morning.

In Estherville, the “HEAT” (High risk Entry and Arrest Team) was utilized to safely enter and execute the warrants. In Rockwell City, the Iowa Department of Public Safety’s Tactical Team was utilized. After each scene was secured, the locations were searched and additional evidence was obtained and collected, according to the Emmet County Sheriff’s Office.

As a result of the investigation, authorities say 19-year-old Connor Uhde of Estherville and 18-year-old CeJay Van Der Wilt of Rockwell City were each charged with Murder in the 1st Degree in Emmet County.