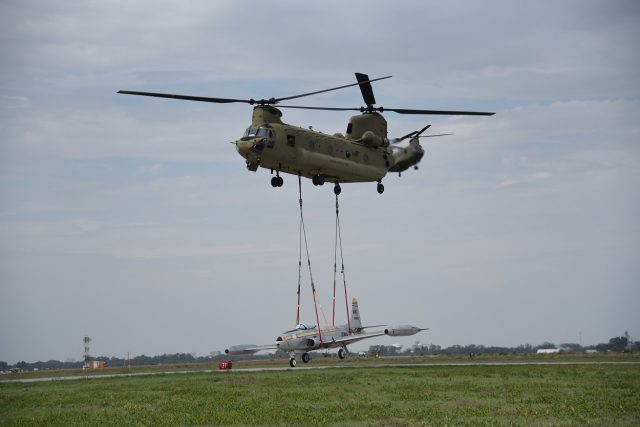 Sioux City, Iowa — An historic F-80 fighter jet made a recent flight to Sioux City for repainting with an assist from a Davenport-based Iowa Army National Guard Chinook helicopter.

The 1950’s era jet has been on display at Camp Dodge in Johnston, and has the markings of the 174th fighter interceptor squadron that was the predecessor to the 185th air refueling wing in Sioux City. Flight engineer Staff Sergeant Jesse Ayala says carrying the jet in a sling under the helicopter to Sioux City allowed them to practice important aircraft recovery methods.


He says the fighter jet hanging below the helicopter on a sling provided some challenges:

The first generation F-80 fighter was assigned to the Iowa Air Guard after the 174th returned to Sioux City following their activation in 1951. The jet will be painted and then flown back to be put on display again at Camp Dodge.
Click here for a video of the jet being delivered to Sioux City