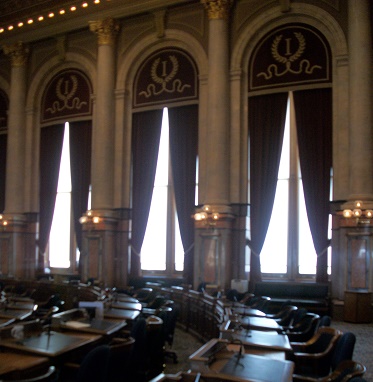 Des Moines, Iowa –(RI)– The Iowa legislature has unanimously passed a police reform bill — responding to the police misconduct the nation saw when a bystander in Minneapolis videotaped the death of George Floyd.

(as said) “I’m hopeful because in this time in Iowa, we stepped up to make real change,” Smith said. “…As a body, by default, we’ve committed here today to shouldering a burden, to ensure that George Floyd, or the scores before him, doesn’t take place in our state — not on our watch.”

Representative Ako Abdul-Samad of Des Moines says the moment came because legislators are listening to a new generation of “game-changers” who have been protesting.

(as said) “My beloved brothers and sisters — and I mean all of you — not only are you part of history, you are rectifying history,” Abdul-Samad said.

(as said) “Is this the solution to every problem that we have, to every injustice? No,” Windschitl said, “but it’s a damned good start.”

The legislation forbids choke holds in nearly every situation and lets the state attorney general investigate deaths caused by police. Once the bill is signed into law –as the governor says she’ll do — police officers with a proven record of misconduct may not be rehired in Iowa. The House and Senate debated the bill at the same time. For the first time in her tenure, Governor Kim Reynolds walked into both chambers and stood to listen. Senate Majority Leader Jack Whitver of Ankeny says the times require government solutions and this bill is a starting point.

(as said) “Tonight, we are showing our state and the world that the Iowa Legislature listens to Iowans,” Whitver said, “and we are willing to lead on tough issues.”

Whitver emphasized the bill’s requirement that Iowa law enforcement officers have annual training sessions in “de-escalation” techniques and the prevention of bias. It took less than two-and-a-half hours for the bill to be formally introduced and passed by the House and Senate. The bill wasn’t really debated. Instead, legislators rose to share their perspectives. Seventy-three-year-old Ruth Ann Gaines, a state representative from Des Moines, says the first time she really understood racism was as an eight-year-old, after she heard Emmett Till’s mother speak about her son’s lynching.

(as said) “I’ve lived a long life in the civil rights movement,” she says. “I’ve sat here year after year listening to debate which I thought showed indifference to what my cause was, so today I am jubilant, I am happy, I am surprised and I am really glad to be a part of it.”

Dozens of Des Moines Black Lives Matter protesters who’d been in the capitol building all day were part of the moment, too. They sat or stood silently in the viewing galleries, many with a fist in the air, as lawmakers spoke, then cast their votes for the bill. Governor Reynolds, in a written statement, says the bill is the result of listening and making a commitment for meaningful change.