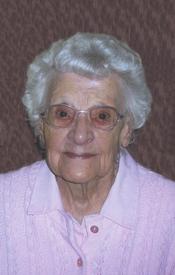 Funeral service will be 10:30 AM, Friday, Feb. 1st at Ebenezer Presbyterian Church in George, IA, with Rev. Paul Soderquist officiating. Burial will follow at Evergreen Lawn Cemetery in George, IA.

Sena Dietz was born January 11, 1917 at the family farm in Lyon County, IA, near Edna, Iowa, the daughter of Charles and Ann (Hilbrands) Sprock. She lived on a farm and attended country school through the 8th grade. At age of 9 Sena’s mother died leaving Sena and her sister, Marie responsible for the house hold duties. For entertainment Sena and her siblings enjoyed playing music, so they formed a band and played for barn dances in the area. She played piano and accordion, which she played by ear.

On February 2, 1938 Sena was united in marriage to Jacob Lubertus Dietz at the Hope Reformed Church Parsonage near George. They lived in George and Sena worked at the “White Shop” and the “George Locker” for many years. Later in life she helped her husband with his trucking business. On March 22, 1994 Sena’s husband Jake died after 56 years of marriage.

After her husband’s death Sena spent most of her time with her sister, Marie. She was a very talented seamstress and enjoyed needlework and crafts. She also enjoyed watching basketball, volleyball and golf on TV. She was a member of Ebenezer Presbyterian Church in George. Most of all she was devoted to her family, which she treasured family gatherings.

This past Monday, January 18, 2013 Sena passed away at Sanford Hospital in Rock Rapids, Iowa at the age of 96. Left to cherish her memory are three nieces, Carol Verhoef of Rock Rapids, IA, Janice Mahler of Aurora, CO and Donna DeBoer of George, IA; a nephew, Daryl (Glenda) Hollander of Hollister, MO; and many other nieces and nephews.

She was preceded in death by her parents, Charles and Ann Sprock; her husband, Jake Dietz; a sister, Marie Hollander; and two brothers, John and “Hank” Sprock.