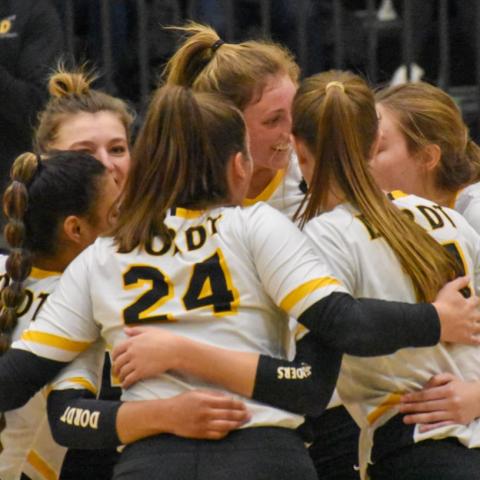 Sioux City, Iowa — The Dordt Defenders will play two volleyball matches on Tuesday, November 30 at the NAIA National Championship. The contests will be part of the 24-team field and are part of the two-day, pool play that opens the event at the final site.

Dordt will play Missouri Baptist at 8:30 Tuesday morning before playing Central Methodist at 3:00.

The Defenders enter play at the final site with an 18-9 record and finished 9-7 in the GPAC and were tied for fifth place in the league. Dordt started the season with a 10-1 record before losing the first of four straight on September 15. The Defenders are 5-2 in their last seven matches and all of their losses are to teams currently rated 22nd or better in the NAIA poll.

The Eagles are 29-7 this season and finished 16-3 in the Heart of America Conference. Three of Central Methodist’s losses have come to Park and six of the seven losses are to teams at the NAIA final site.

The Spartans are 28-2 this season and finished the American Midwest Conference with a 9-0 record. Both losses for Missouri Baptist came on August 27 when it lost to Midland in five and was swept by Viterbo. Since then the defending national champion has run off 24 wins in a row and has been pushed to five in a match and it has swept the last eight matches.

The winner of this pool will play at 7:30 on Thursday night in the quarterfinals against the survivors of Pool F which is comprised of Providence, Life and Lindsey Wilson. The semifinals will be played on Friday night and the championship on Saturday, December 4 at 7:00.