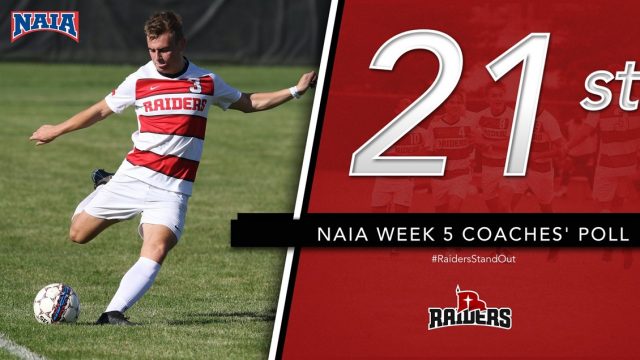 The Raiders are coming off two Great Plains Athletic Conference (GPAC) wins last week, in their first week as a ranked team in program history. In their first game as a ranked team, the Raiders got down 2-0 early by halftime. But the then No. 23-ranked Raiders would not be deterred scoring two goals in the second half to send the game into overtime, thanks to a 47th minute goal from Johannes von Saldern (So., Jena, Germany/Otto Schott Gymnasium) and a 61st minute goal by Luke Happer (Fr., Overland Park, Kan./Saint James Academy). Adam De Boer (So., Orange City, Iowa/MOC-Floyd Valley) would net the game-winning goal in overtime with 12 seconds left to go in the period to allow the Raiders to escape Yankton, S.D. with the victory.

In a completely different story, Northwestern turned it on against Jamestown, scoring a season-high four goals in their fifth shutout of the season. It was all Raiders against the Jimmies as James Bolger (Jr., Boyle, Republic of Ireland/Abbey Community College) finds the back of the net to start the scoring in the 33rd minute. Joshua Wingfield (Sr., Bronx, N.Y./Polytech) nets a 60th minute goal, followed five minutes later by the shot-of-the-year by Marco Alessio (So., Chioggia, Italy/Liceo Ciuseppe Veronese) in the 65th minute. Stan van den Beld (Fr., Voorhout, Netherlands/Rijnlands Lyceum Sassenheim) would net the final goal of the contest, converting a penalty kick in the 88th minute.

Northwestern is the only representative of the GPAC this week.

The Raiders are set to play host to the Dakota Wesleyan University Tigers (2-9, 1-3 GPAC) this evening at the NWC Soccer Complex with kickoff scheduled for 7:15 p.m.