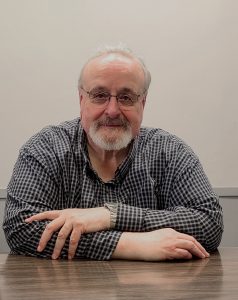 Tom was born and raised in Spencer, where he was bitten early by the radio bug. He started his radio career in 1975, while still attending high school. He attended Simpson College in Indianola, Iowa, then explored various careers, including law enforcement, running a motel and others, before finding his way back into a radio studio.

After working at various spots up and down the radio dial, he came to KIWA in the spring of 1987. He has, at various times, served as an Announcer in various day parts, Sports Director, Chief Engineer, News Reporter and Advertising Representative.

Outside of KIWA, Tom is a Certified Firearms Instructor, and teaches Concealed Weapons Permit Classes.

Tom and his wife, Kathy, live in Sheldon. They are members of St. Patrick’s Catholic Church, where Tom is a member of the Knights Of Columbus.

Tom has three favorite NFL teams; the Kansas City Chiefs, the Minnesota Vikings, and whomever is playing the Denver Broncos, and is a rabid fan of the ISU Cyclones.