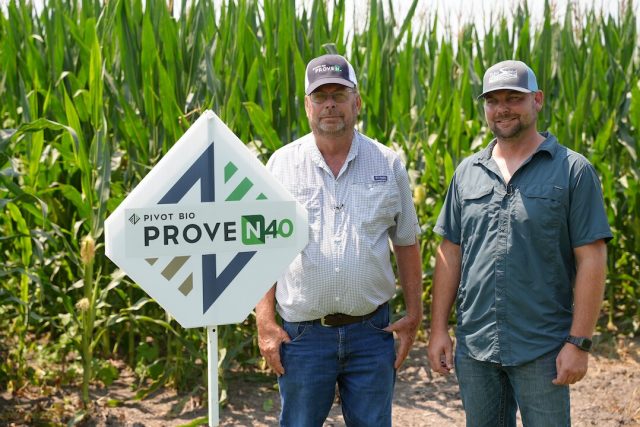 Pivot Bio technical services manager David Hughes explains that the field day was held at Dobson Farms, which is owned and operated by Mark and Lance Dobson. They manage one of the most extensive nitrogen focused demo plots in Missouri.

“We were looking at different nitrogen management practices,” said Hughes. “And we looked at which ones were going to perform better on their operation as they incorporate a biological source of nitrogen into their system from Pivot Bio.”

The event previewed Pivot Bio’s new second generation product PROVEN 40. Hughes says PROVEN 40 – which is being promoted as a tool to replace up to 40 pounds per acre of synthetic nitrogen – was announced by company officials in late July.

“We’re moving to a new product that is actually putting more nitrogen into the plant biologically than our first product PROVEN,” said Hughes. “It’s a pretty exciting time in the company to move forward with our growers and our customers in a way that we can actually supply more nitrogen biologically in their nitrogen management program.”

Hughes says attendees took away great insights and steps on how other growers can better understand what is behind their nitrogen losses and how that is affecting performance. Mark and Lance shared best practices for mitigating nitrogen loss and some of the lessons they have learned from their test plots.

“They have traditionally had a program where they have been pretty heavy with a late fall to winter anhydrous application as their primary base of nitrogen fertilizer,” said Hughes. “Mark addressed the fact that because they knew they had to stabilize that synthetic nitrogen, they’ve always used a nitrogen stabilizer.”

According to the company’s website, Pivot Bio PROVEN 40 adheres directly to the root of the corn plant and does not run off during weather events, providing farmers with a more reliable and consistent method for delivering plant nutrition.