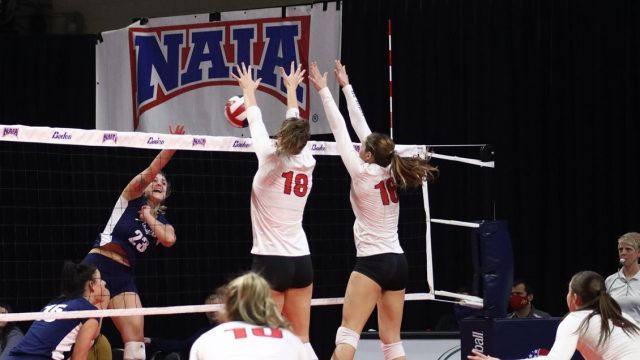 Northwestern 3, College of Saint Mary 0 (25-17, 25-16, 25-21)
Similar to the match back on October 15 inside the Bultman Center, the Raiders got off to a very hot start against Great Plains Athletic Conference (GPAC) foe the Flames of the College of Saint Mary (26-7), picking up 15 kills in the opening set taking complete control right away. Northwestern jumped out to a fast 10-4 lead and never looked back, as the Raiders prevailed 25-17 in the opening set.

Set two proved to be more Raider dominance, as the Raiders never trailed the entire set. Jumping out to an early 7-3 lead behind three kills from sophomore Macay Van’t Hul (So., Rock Valley, Iowa/Western Christian), the Raiders pushed forward to eventually take the set 25-16.

“It was a great start to the tournament and we beat a great team. I thought our whole team played well which you need in matches like this,” said head coach Kyle Van Den Bosch. “Our servers did a great job of keeping them off balance all morning. Our hitters were really good at finishing points.”

The third set was controlled by Northwestern as well, but the Flames made a push in a 25-21 Raider set victory. At one point, Northwestern trailed 11-8 before going on a 6-0 run to take control of what would prove to be the final set. The Flames ended the run with a kill before another Raider 4-0 run pushed the score to 20-13. Two Flames spurts of 3-0 kept the Flames within striking distance, the second one being at a Raider match point at 24-18. Ultimately, the Raiders held off the final CSM push to prevail and sweep the Flames.

The Raider defense did a tremendous job of keeping the CSM attackers at bay, holding the Flames to a match hitting percentage of .065. Like the meeting back in October, senior Bekah Horstman (Sr., Pella, Iowa/Pella Christian) recorded nine blocks to lead all blockers. Savonne Sterk (So., Lynden, Wash./Lynden) tallied six blocks in the victory.

An EOU time out cannot curtail the Raider momentum, as a 5-0 lead gives Northwestern an 18-13 lead and forces the Mountaineers to burn their second time out of the set. A big solo block from Dexter later in the set, and a tip kill from Peters, gives the Raiders a 23-18 lead. A 3-0 Mountaineer spurt prompts a Northwestern time out, but an Olivia Schaub (Jr., Scottsbluff, Neb./Gering) kill secures the first set for the Raiders, 25-22. A .102 hitting percentage was enough to squeak out the victory, as the Mountaineers hit -.019 in the set.

“(Eastern Oregon) made us play out of system more than any other team we played so far this season,” said Van Den Bosch. “They focused on Alysen and Bekah, Olivia (Schaub), Katie, and Macay really stepped up when we needed them to!”

Another back and forth set in set two, as the Raiders would find themselves trailing 16-12 as coach Van Den Bosch took his first time out of the set. Eastern Oregon would extend their lead to 19-13 as the Raiders would take their second time out. Fighting back to make it a battle down the stretch the Raiders battled back to 20-17, forcing EOU to spend a time out to talk things over. Ultimately, a 13-11 advantage in kills would guide the Mountaineers to a 25-20 set victory.

The Raiders jumped out to an 8-5 lead in the third set, but the Mountaineers would respond with 3 straight points of their own to make it 8-8. A long rally with the Raiders leading 12-11 would result in an attacking error by EOU, giving Northwestern a 13-11 lead and the momentum – the Mountaineers respond with a time out. Following the time out, Eastern Oregon would respond with 3 straight points, before Dexter would stifle the spurt with a kill. A block from Van’t Hul and Sterk would increase the Raider lead to 17-14, carrying with the momentum EOU would use their second time out as the Raiders would lead 19-15. The momentum would be enough to guide the Raiders to a 25-16 set victory, taking a 2-1 match lead.

The Mountaineers would jump out to another early lead in the fourth set at 9-4, prompting a Northwestern time out. The time out worked as the Raiders picked up 5 straight points thanks, in part, to back-to-back blocks, to take a 10-9 lead forcing an EOU time out. The Mountaineers would build up a 16-12 run. The Raiders would cut the EOU lead to 18-16, forcing the second Mountaineer time out of the set. A massive kill from Schaub ties the match at 19-19, eventually taking the lead at 21-20. Eastern Oregon would battle back and take set four 25-22, to force the decisive set five.

A big block from Schaub and Van’t Hul would extend the Raider lead to 4-2 early in the fifth set, as part of a 5-0 spurt that would prompt a quick Eastern Oregon time out with the Raiders up 6-2. The Mountaineers would fight back, making it 7-5 before a big kill from Horstman got the Raider crowd excited. With a 10-5 advantage, Eastern Oregon takes their final time out of the match. Following the break in the action, another block from Horstman would effectively seal the deal for the Raiders. Northwestern would prevail 15-8 to win the match.

“Quite a match with a great team effort tonight,” noted Van Den Bosch. “We haven’t been so good in the fifth set but it’s good to get the monkey off our back tonight!”

Van’t Hul had a match-high 15 kills to guide the Raiders past Eastern Oregon tonight. Dexter (11) and Peters (10) both also recorded double digit kills. Van’t Hul also led the match with eight blocks, followed with Horstman’s six. Granstra had 26 assists, while Schutt had 17. Strasser picked up 32 digs to lead the team, as the Mountaineers consistently hit in her direction all match long.

Up Next: The Raiders advance to the Quarterfinal round of the 2021 NAIA Women’s Volleyball National Championship and will await their opponent after the conclusion of tomorrow’s pool play rounds. Northwestern will be in action again on Thursday with a time TBD. Stay tuned for more information to come in the coming days.