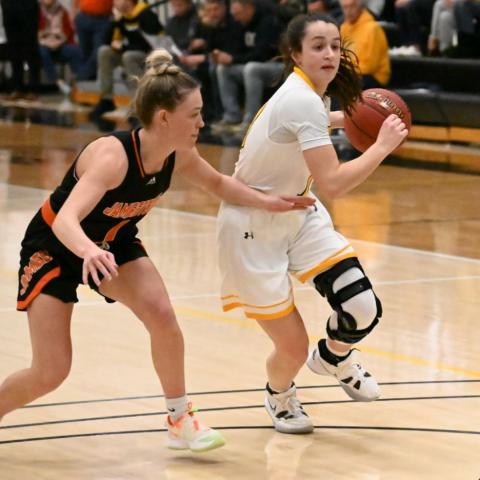 Dordt will host Briar Cliff in GPAC basketball on Saturday, January 15 at 5:00.

The Chargers are 8-3 in the GPAC and 11-6 overall.  Briar Cliff has won three in a row since back to back losses to Grand View and Hastings.  The wins are over Dakota Wesleyan, Doane and Jamestown.

Briar Cliff is outscoring teams 69-62 and outrebound teams 37-34 and the Chargers convert 44 percent of their field goals and allow 40 percent for opponents.  Briar Cliff has also converted 35 percent of its three-point shots and defend the arc for 29 percent success.

Dordt is 13-6 this season and 6-5 in the GPAC and have won six in a row dating back to a win over Westcliff on December 18.

The Defenders outscore teams 75-68 and outrebound teams 38-35 and are making 43 percent of its field goals with 40 percent allowed for opponents.

Briar Cliff beat Jamestown 66-65 on a Rachel Langel free throw with no time left on the clock. Payton Slaughter led a balanced scoring attack with 13 and Konnor Sudmann added 12 with five rebounds. Cadence Davis scored 11 and Kennedy Benne had 10 with eight steals.

Dordt beat Doane 101-82 on Wednesday night and exploded for 34 points in the third quarter to put the game away for an 81-58 lead. Veerbeek scored 22 points with 10 rebounds and Gustafson added 17 and Chmielewski and Beckman had 15 and 14 respectively.

Briar Cliff beat Dordt 62-56 on November 23.  Veerbeek had 13 and Beckman 11 in the loss and Deitchler and Slaughter had 12 and 11 points for Briar Cliff. Neither team shot well with Briar Cliff making 34 percent of its field goals and Dordt 31.