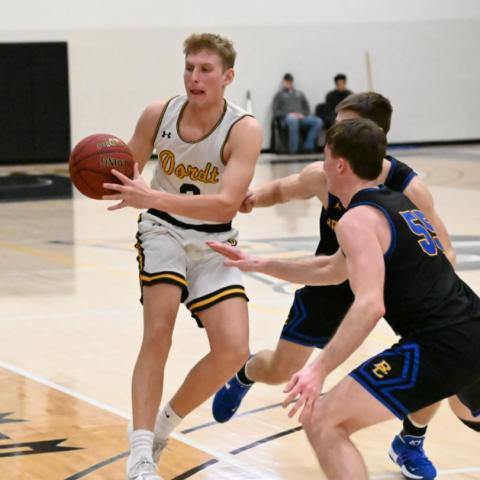 Midland is 14-8 overall and 5-7 in the conference and has lost four in a row since a January 5 win over Doane. The Warriors lost to Morningside by one, Dakota Wesleyan by three, Northwestern by 11 and Mount Marty most recently on January 19.

The Defenders are 13-7 this season and hold a 5-6 record in league play. Dordt’s lost their last three games after winning seven of eight and the last two losses have been by two points each.

The Defenders have outscored teams 83-72 and outrebound teams 37-33. Dordt converts 50 percent of its field goals and limit opponents to 44 percent. Dordt also makes 37 percent of their three-point shots.

Dordt held on to win 88-83 in overtime in the first meeting on December 4. The Defenders were up 42-33 at halftime and had to withstand a 25 point outburst by Emanuel Bryson and Laurence Merritt added 23 with five assists. Dordt got 30 points from Vis and Coppock added 27 and Bleeker 16.