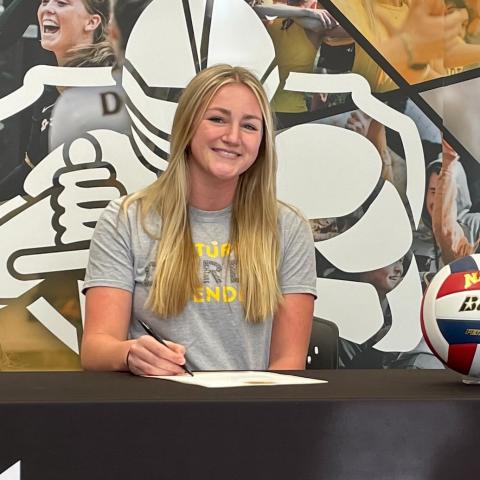 “Jaylin has been a strong athlete for the Western Christian volleyball program in her role as a setter. She has played high level volleyball club and experienced great competition during each of her school and club seasons. Jaylin has a deep faith for the Lord and wants to excel in all areas of her life which is a wonderful picture of The Defender Way. We want to thank her high school coach Tammi Veerbeek and club coach Melissa Smith for her development,” said former Dordt volleyball coach Chad Hanson.

Van Dyken has been the setter for the Wolfpack the last two seasons and helped them to a pair of state tournament berths with a semifinal finish in 2020 and a state championship runner-up conclusion in 2021. She totaled 1,976 assists with 423 digs, 70 blocks and 45 ace serves during her career. Van Dyken was twice named first-team all-conference, all-district and all-Northwest Iowa Review. She claimed third-team all-state honors in 2020 and second-team honors in 2021. She also competed for the MVP Volleyball Club in Sioux City, Iowa.

“I chose to commit to Dordt because of the atmosphere and culture it provides for all the students, not only in athletics, but in the community as a whole. I also chose Dordt over other colleges for volleyball because I believe I will get a fair shot to prove myself to the team and coaches and be a part of a team that truly loves and cares about me,” said Van Dyken.

Jaylin is the daughter of Jay and Kim Van Dyken of Hull, Iowa. She plans to study business and social work at Dordt.