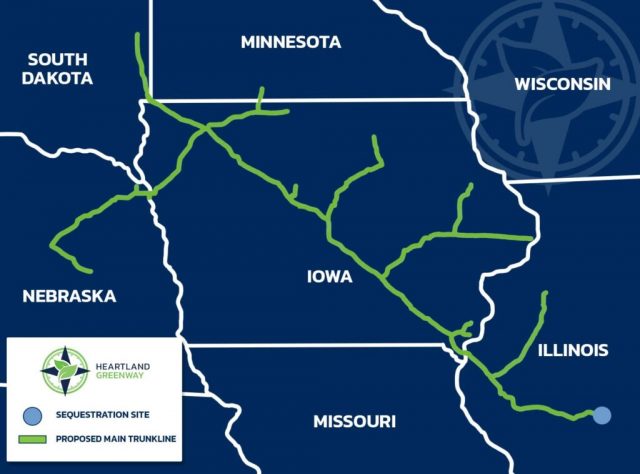 Northwest Iowa — A second company that has proposed to build a carbon dioxide pipeline across several midwest states, including Iowa, has announced it’s moving forward with its plans.

Texas-based Navigator CO2 Ventures LLC announced Wednesday it has obtained necessary board approvals and will be moving on to the next phase of planning for its “Heartland Greenway” project. The approximately 1,200 mile pipeline system will span five states, with origin points in Nebraska, Iowa, South Dakota, Minnesota, and Illinois.

IUB officials say they expect Navigator will soon be filing a request for public informational meetings which are the first steps in the process before a company can file a petition for a hazardous liquid pipeline permit under Iowa law.

Navigator has announced that Valero Energy, which operates an ethanol plant in Northwest Iowa, will be its anchor partner in the project.

According to Navigator, at full capacity, the Heartland Greenway System will have the ability to capture and store enough CO2 to be the equivalent of removing approximately 2.6 million cars from the road per year, planting 550 million trees per year, or eliminating the carbon footprint of Kansas City 1.5 times.