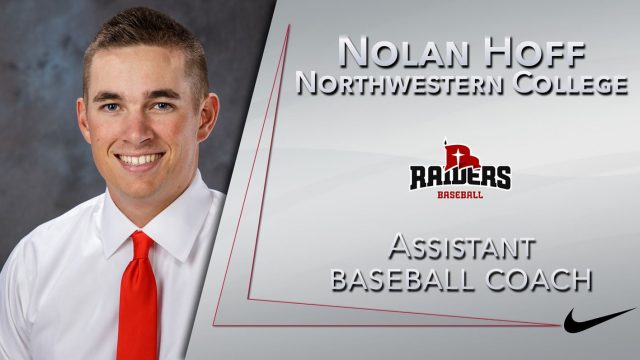 “I am grateful to the entire Northwestern College staff for welcoming me into the Red Raiders’ athletic department,” noted Hoff. “I am especially grateful to Coach Wede and Dr. Parker for trusting me with a greater role on the baseball team. Since I arrived a few short months ago, I have been impressed by the people and players and NWC.”

Hoff will continue to serve as the program’s hitting coach and will assist with infield defense and recruiting efforts of the Red Raider baseball program.

“I am excited to continue working with Nolan in an expanded role. He has shown a strong desire to coach our players well,” noted Wede. “Not only in baseball but also in their lives away from the diamond.”

Hoff joins the Red Raiders staff after a stint at Wenatchee Valley Community College in Wenatchee, Washington. He played his college ball at fellow GPAC institution, Morningside College from 2014 to 2017. While at Morningside, he earned First Team All-Conference honors in 2016 and 2017 as an infielder for the Mustangs, to go along with a GPAC conference tournament title in 2016. Hoff is one of five Mustangs in program history to tally over 200 hits in his career in a Morningside uniform.

“I came here searching for a place to serve God in an athletic arena where I can openly infuse my faith into every practice and every conversation. I have found that here. My hope is that God will use me in this position to encourage and guide the student-athletes in our program and help them become who they were created to be.”

In conjunction with his baseball duties, Hoff will serve as an assistant in the Northwestern College athletic communications office during the fall and winter athletic seasons.

“My wife, Shelby, and I are blessed to be part of this disciple-building community, and we look forward to what God has in store,” said Hoff.

Hoff grew up in southern California, where he attended Walnut High School. He is currently pursuing his Masters in Biblical Studies from The Master’s University (Calif.). Hoff’s wife, Shelby Hoff, is an assistant coach on the Raider volleyball team.