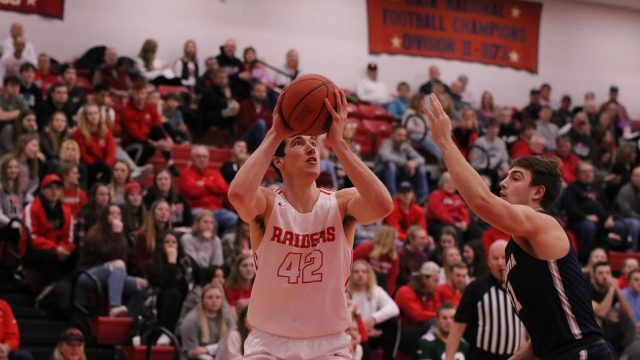 ORANGE CITY, Iowa — The (RV) Northwestern College men’s basketball team (17-6, 9-4 GPAC) snapped a six-game losing streak and evened the season series against the No. 25-ranked Bulldogs of Concordia (Neb.) (17-5, 10-4 GPAC) as Alex Van Kalsbeek ties a career-high with 35 points as the Raiders remain in the hunt in the Great Plains Athletic Conference (GPAC) race Saturday afternoon.

“It was a war out there tonight, said head coach Kris Korver. “Our guys prepared well and Concordia played hard like usual, but were able to match it.”

Northwestern jumped out to a 16-10 lead early in the contest, thanks to a Conner Geddes (Fr., Sioux Falls, S.D./Harrisburg) 3-pointer, but the Bulldogs would respond with a 9-2 run to take a 19-18 lead. The two teams would trade baskets until Northwestern would build their lead back up to six points with seven minutes in the first half, 29-24. Back-to-back lay-ups from Van Kalsbeek (So., Orange City, Iowa/MOC-Floyd Valley) would give the Raiders their largest lead of the half at 11 (46-35) with under two minutes remaining. Concordia would end the half on a 6-0 spurt to cut that double-digit Raider lead down to 46-41 at the half.

“This league is just tough,” said Korver. “Our guys responded really well tonight after the loss at Briar Cliff on Wednesday.”

The two teams would trade baskets to open the second half, as Matt Onken (R-So., Marshall, Minn./Marshall) would score four quick points to give the Raiders an eight-point advantage three minutes into the half. A Trent Hilbrands (Sr., Remsen, Iowa/Le Mars Community) lay-up with 13 minutes to go gave the Raiders a double-digit lead, and the Bulldogs would never cut the lead back down to single digits the rest of the game.

The second half was the Van Kalsbeek and Hilbrands show. Van Kalsbeek scored 19 second half points, and went 7-for-8 from the free throw line in the half. Hilbrands scored 12 of his 19 points in the second half. “Trent made some big shots for us. He’s been around the block so long, he just instinctively sees stuffs and took advantage of it,” noted Korver.

Four Raiders scored in double-digits in the 15-point victory tonight. Van Kalsbeek led all scorers with 35 points on 14-for-19 shooting from the floor and 7-for-8 from the free throw line, while also grabbing seven rebounds. Hilbrands dropped 19 points, followed by Onken who had 16 points and seven rebounds. DeMeulenaere had 12 points and a game-high eight rebounds.

“I thought Alex was just a load tonight,” said Korver. “Every team defends you a little differently and Concordia tried guarding Alex one-on-one with their physicality. He had to have his big boy pants on tonight!”

Up Next: The Raiders hit the road for a tough four-game road stretch, beginning with a matchup against (RV) Morningside (11-7, 8-5 GPAC) set for 7:45 p.m. from the Rosen Verdoorn Sports Center on the campus of Morningside University on Wednesday, January 26. “We know this stretch won’t be easy, we’re going to need to prepare well,” said Korver.