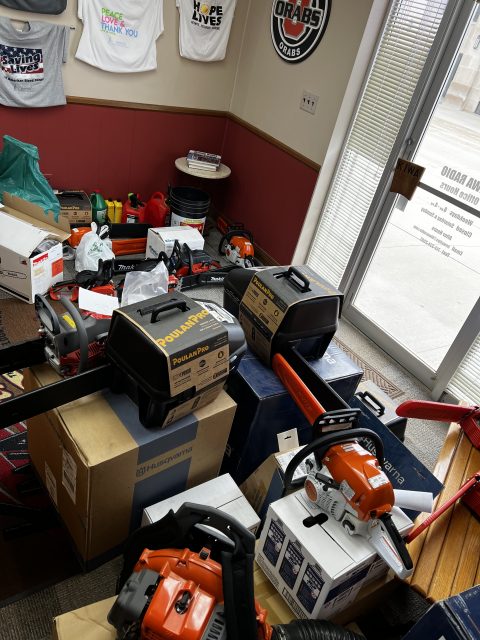 Sheldon, Iowa — People and businesses have stepped up in a big way to help the people devastated by the recent tornadoes in Kentucky. And there is still a little bit of time for you to help.

Rise Ministries would like to thank Lyle’s Small Engine Repair, Sanborn Hardware, Sheldon Power and Equipment, O’Brien County Implement, Bomgaars, Neal Chase Lumber, Living Water Community Church, Sheldon Broadcasting Co., Inc and the Church of the Brethren for donating chainsaws and accessories. Also thank you for the generous donations of chainsaws and cash from area residents.  19 chainsaws have been donated along with safety equipment, bar oil, gas containers and thousands in cash.

Rise Ministries, in partnership with the group “Eight Days of Hope”, are taking the supplies most needed in the storm ravaged area…chainsaws.

That’s Rise Ministries founder and president Rob Roozeboom. In answer to the need in Kentucky, earlier this week we put out a plea for donations of NEW gas-powered chainsaws, or monetary donations to be used to purchase new chainsaws, and your support has been tremendous.

Rise Ministries, KIWA Radio and the people in Kentucky who continue to be affected by this devastating storm thank you.

Northwest Iowa — As we know, tornadoes devastated a large part of Kentucky recently, and Rise Ministries in Sheldon is organizing a relief effort.

Rise founder and president Rob Roozeboom says the local organization became involved through a group that was at RiseFest 2021 last summer.

Roozeboom says the devastated areas have food, water and clothing, but are in need of a different kind of relief item.

He says Rise put their collective heads together and came up with a plan.

Roozeboom says they’re accepting donations of NEW chainsaws, or monetary donations toward the cost of chainsaws and talks about how to donate.

Donations of NEW chainsaws, or money to help purchase new chainsaws for the project can be dropped off between 8 am and 4 pm, at the KIWA Studios, 411 9th Street, in Sheldon. And they ask that you drop them off by this Friday, December 31st, so they can have them in hand when they travel to Kentucky this weekend. Again, checks should be made payable to Rise Ministries.

This area has a rich tradition of stepping up to help people in need. Let’s keep that tradition alive by donating a new chainsaw or money toward the purchase of new chainsaws for our friends in Kentucky.